This post is English translation of “Massdropからキーキャッピーが届いたよ！【ダイレクトステマ】“. Please be patient with my poor English. Ta-da.🎉 I got an another merchandise from Massdrop.📦

Very light cardboard box against the size, two small pillow boxes inside. Brown one and black one. Yes, I joined the Keycappie drop myself. I just wanted to experience how they will be delivered, which were shipped to Massdrop by myself. I wanted to do it in the first time, but I forgot because I was too excited. X) I ordered Siesta Keycappies, which is the new Keycappie friend from this time, in keychain version. I know how they are packaged because I did it myself. Still, I’m exciting just like when I bought a “product” I wanted.(It’s a kind of product, of course but… you know)

It takes time to reach people’s house who bought them, and also they have to across the sea. So I worried about the boxes, but it seems OK. Relieved! I ordered Black and Stone color which is new lineup of second drop. Color of keycap and strap is completely random. I got translucent-red for Black, and lime-green for Stone.

Maybe you think black Keycappie is subdued, but actually, they makes their keycap and switches shining because of their low-key color. White, Stone and Black, everyone is cute!🎨 Also the switches are random. I used more than 70 kinds of switches on this drop. Through combining strap and keycap color, over a ten-thousand types of Keycappies were dropped, theoricaly. Including Keycappies’ color (white/black/stone), it becomes three-thousand, if I don’t mistake calculation. You can think that the Keycappie which arrived to your house, is the only one Keycappie just for you!

Of course, don’t hesitate to change Keycappie’s switch and keycap to your favorite ones. They love to dress up!

By the way I got Box Royal switch and Novelias switch. Both has box-shafts, strong bumped tactile. Usually I only use clicky but they are enough attractive switches to play around. Especially the Novelias is super cute Olivia’s pink-colored switch. I was happy to get them in advance of this drop. So I could deliver them with Keycappie! 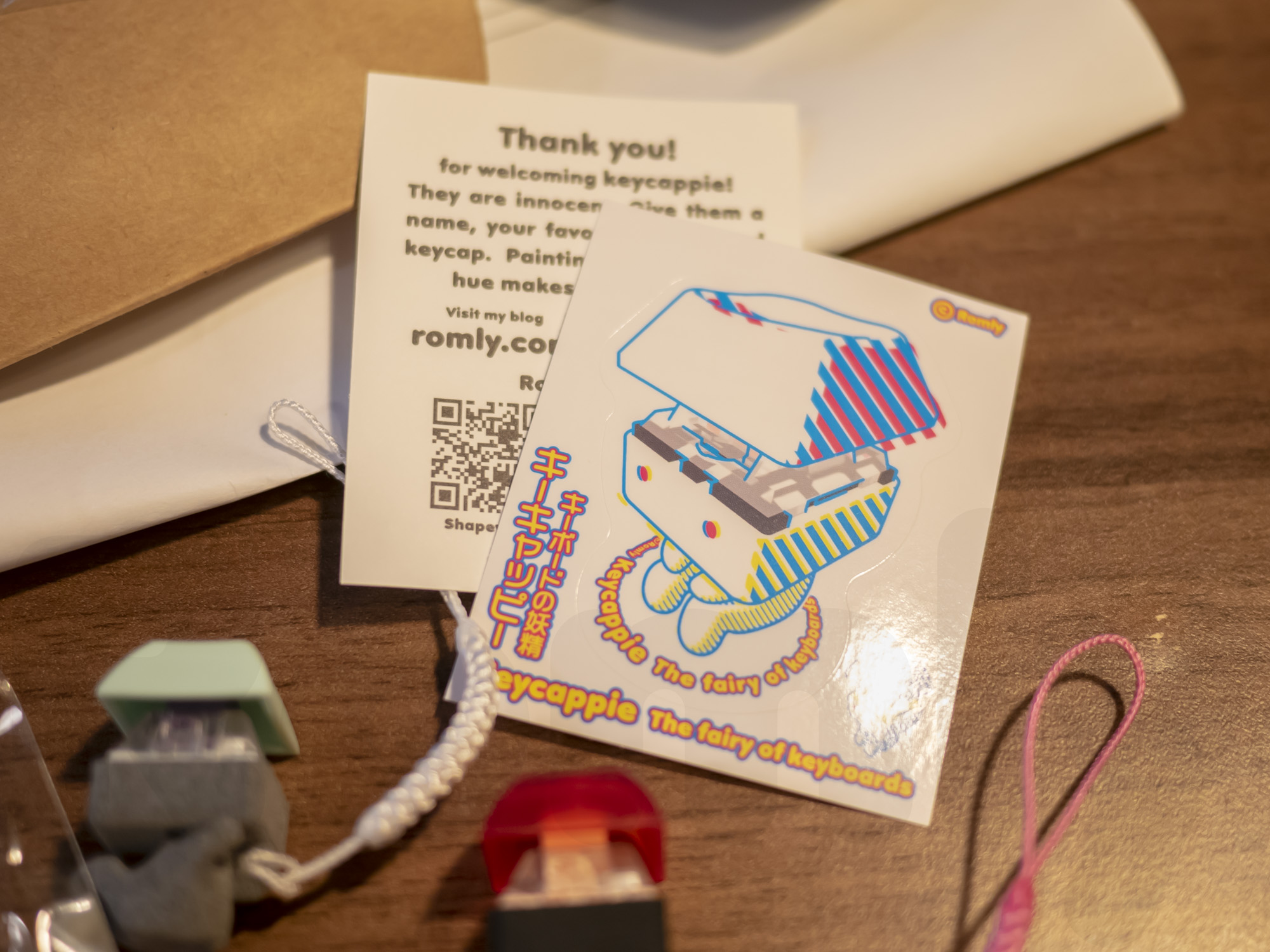 And I put thanks card for each Keycappie, these are actually a sticker as you noticed! I think you got two of them because Massdrop Keycappie is 2-pack. So you can spare one and use one even if you are a person who ‘can’t use Elixir until complete the game’ like me. Oh, forget about animal post-it on the box. They were supposed to identify what type of Keycappie in the box. But they ran out while middle of packaging, I had to use color dot seal after that.

So, thank you for joining the Massdrop Keycappie 2nd round. These my Keycappies also acrossed the sea twice. It mean so much to me.😌

I hope there will be third round! That’s on you! Please consider support me on Patreon! Thank you!

Patreon
Romly is creating Keycappie, Keycaps and mechanical keyboard related things |...
https://www.patreon.com/keycappie
Become a patron of Romly today: Read 4 posts by Romly and get access to exclusive content and experiences on the world’s largest membership platform for artists and creators.