This post is English translation of “【キーボード自由研究】実験してみよう！ スイッチの重さ⚖️“. Please be patient with my poor English.

* Let me explain: It’s quite common that there are mini science project homework at elementary school in Japan. It’s called “Jiyu-Kenkyu”, means free research if I translate it literally.

Mechanical keyboard switches has a lot of variety. ‘Linear’ moves smoothly. ‘Tactile’ has a bump. ‘Clicky’ makes sound. I like Clicky.
And, there are differences of weight. ‘Weight’ means force of repulsion. Gateron Green is quite heavy. Red and Clear are light. Force can indicate as number value. Red is 45g, Blue is 55g, Green is 80g. The unit called ‘Gram Force‘, display as ‘gf‘. You can feel the weight when you press switches. I was just wondering that are these numbers true? I think I want to research it myself.

Weight Kit Set for Balance Scale
These are steel calibration weights. It used with balance scale when measuring the weight of something. The science room at elementary school I attended, had these. I could buy this as around 2,000 yen at Amazon.co.jp.
Scale pan keycap
Keycap which able to hold weights. It has large plate top to hold steel weights. I made it with 3D printing.
Digital Scale
It can measure the weight until 500g with precision of 0.01g. I’ll use it for measuring scale pan keycap’s weight. It is about 1,000 yen at Amazon.co.jp.
Switches
I’m going to research these switches. These are Gateron’s normal switches. Red, Black, Blue, Brown, Green, Yellow and Clear. 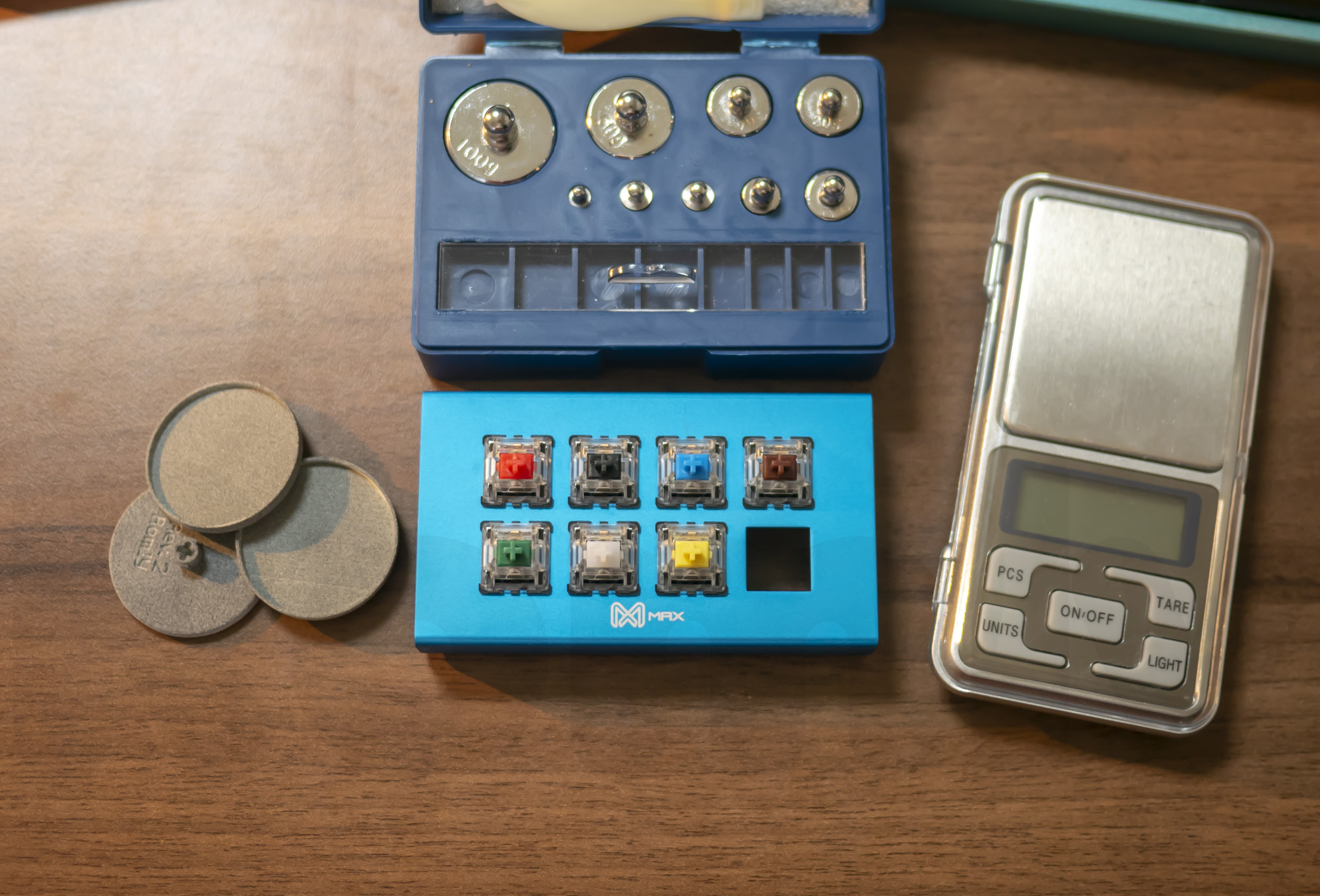 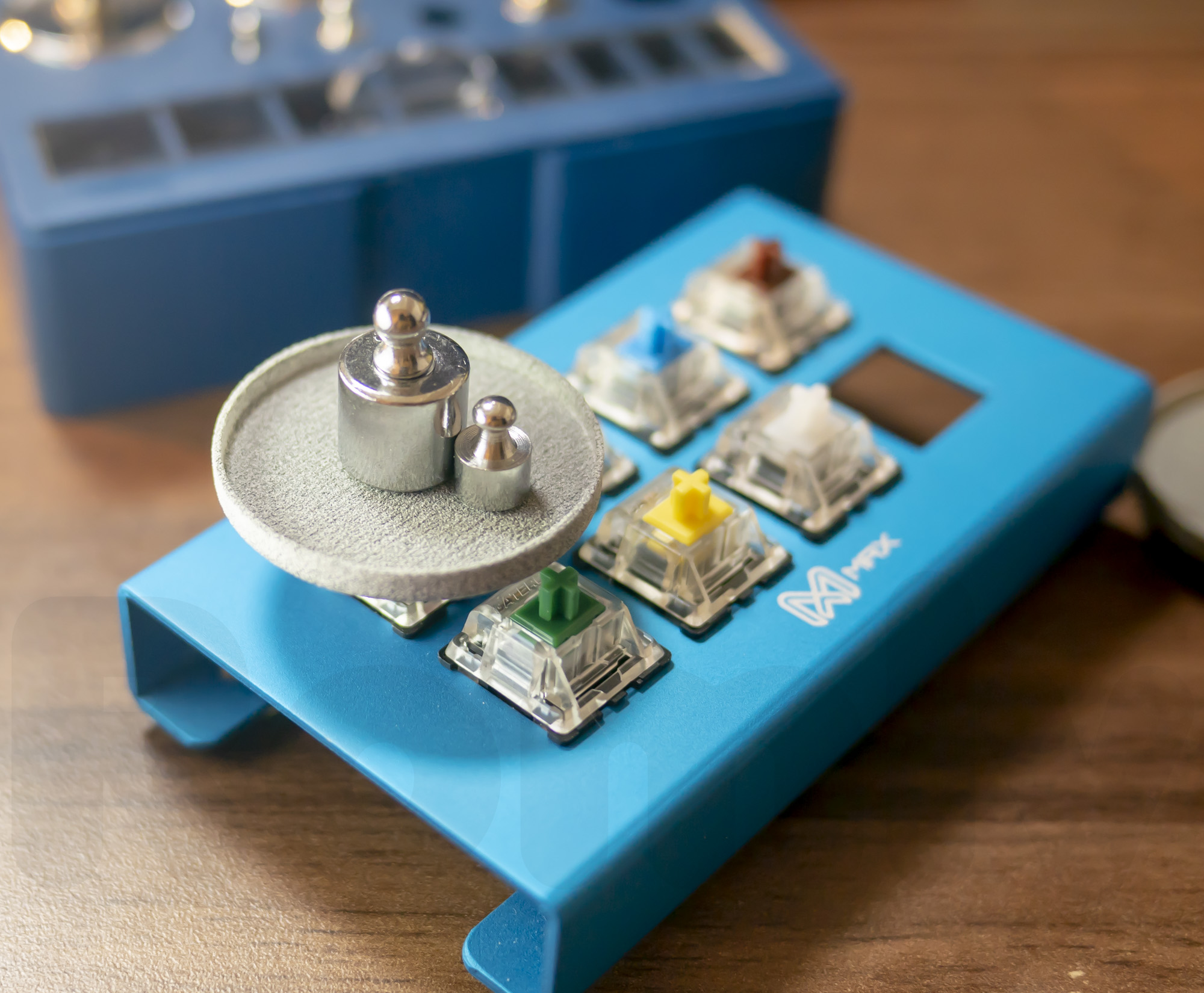 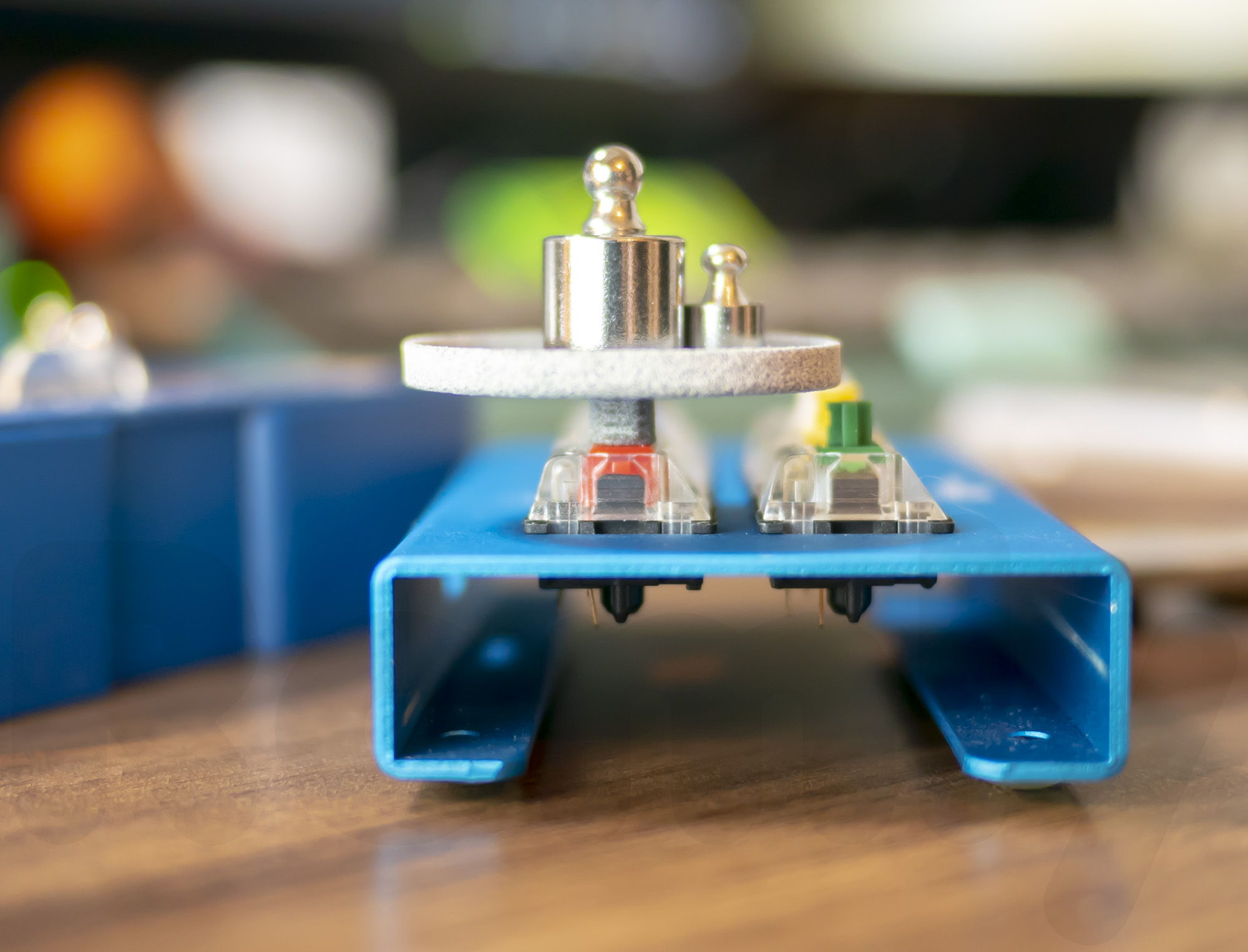 There is a variation in measurement of Scale pan keycaps weights. It was 1.66g to 1.70g. I’ll use 1.7g, a nice round number. It is so light because it is made by PA12 material through MJF 3D printing technology. 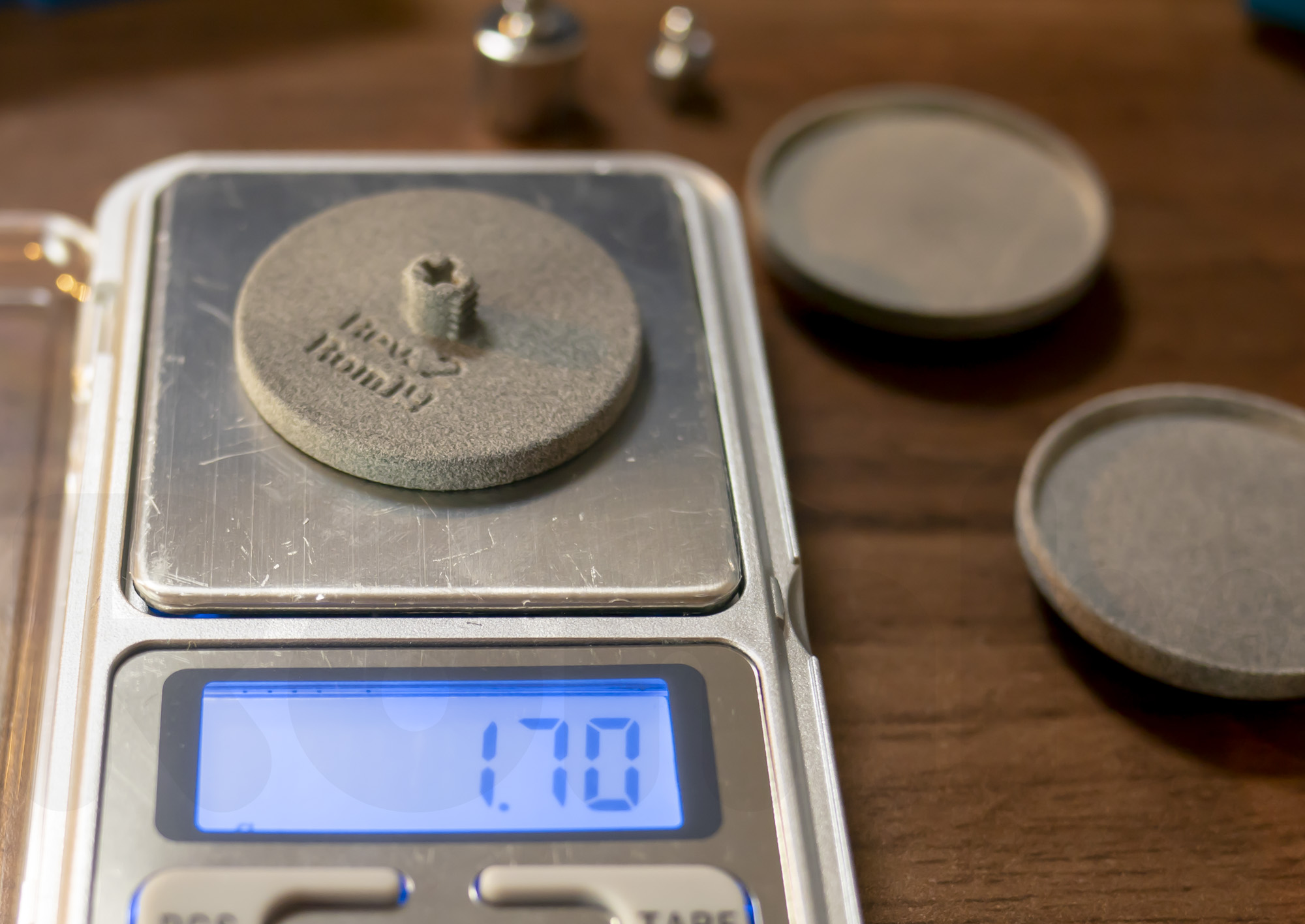 I made scales at Cherry MX joint part of Scale pan keycap. When the first gauge is under the switch top housing, it means that stem is down around 1.5mm. These mechanical switches has 4mm strokes. So three gauges and a half will be under the top housing when press the switch till the bottom. 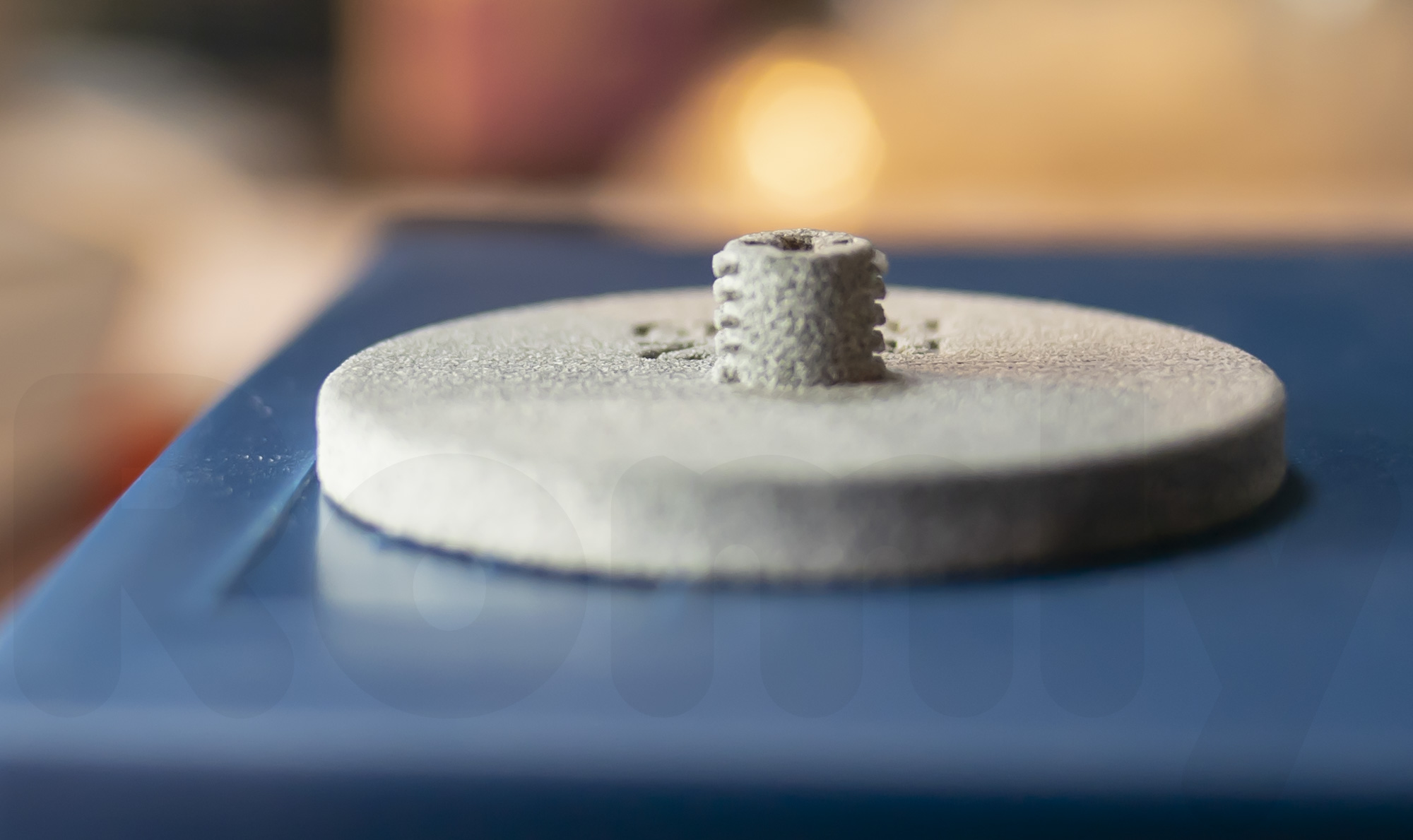 Total weight of steel weights on Scale pan keycap for pressing each switches until 1.5mm, 2.5mm and the bottom, were these below. It’s not include Scale pan keycap’s weight.

※1
Blue and Green are Clicky switch. More weights needed for passing click point than pressing until 2.5mm point. It was 55g for Blue, and 70g for Green.
※2
Brown is a tactile switch. It can’t stop at first gauge point. When it passes the bump, it is around second gauge.

There are peak force data at Massdrop. The table below is comparing these data to my results.

Each values are quite similar to the data except the Black has a big difference between the data and my result. Relative relation like the one is lighter / heavier to another is also accurate. And the theory ‘Yellow is slightly lighter than Black’ is proved. I am happy because my science experiment went well than I thought.

The difficulties was that the switch easily stops when Scale pan keycap is crooked. It easily stops/moves by the position of steel weights. So it was hard to measure. I think it was easy stacking coins. And then measure that coins after.

I hope you enjoyed something on this keyboard summer science project. I bought steel weights kit set and digital scale, and made ‘Scale pan keycap’ for this post. It tooks time and money against the nonsense of it. So please praise me! 🙂
I didn’t expect I would buy steel weights kit at my age. Looking back, there was a lot of useful tools at science room in elementary school. Still I don’t like studying but the knowledge ‘There are steel weights kit for measuring’ is helped this my little project. Studying is important…

Anyway, I’m surprised it went well than I thought.

So, ok then, I’m going to test it! Then I made a keycap for that and I did this mini experiment. But actually, the results are precise enough. My Black result value is too heavy compare to the data. But see the Input Club’s force curve, it says 78 gf. Turns out it same as my result. I’m very surprised this cheap, analog experiment made such a precise values. Same precision goes Blue and Green, clicky switches. Very similar to Input Club’s data for the weight for passing clicky point. It was little less for Green. Data is 79g but my result was 70g… Weight for passing bump, 48g, is equal to Input Club’s data.

Of course, the manufacturer made switches like so. I just did experiment and observe. But it was fun adjusting steel weights. That reminds me the days of elementary school. And reaching my desired outcome was feeling so good. If I knew this fun when I was a child, I would be a person who likes studying… LOL

Green can hold this much steel weights. She endures so much weight against her looks. I think Cherry made heaviest switch a green, was they thinking Hulk when they choosing the color? 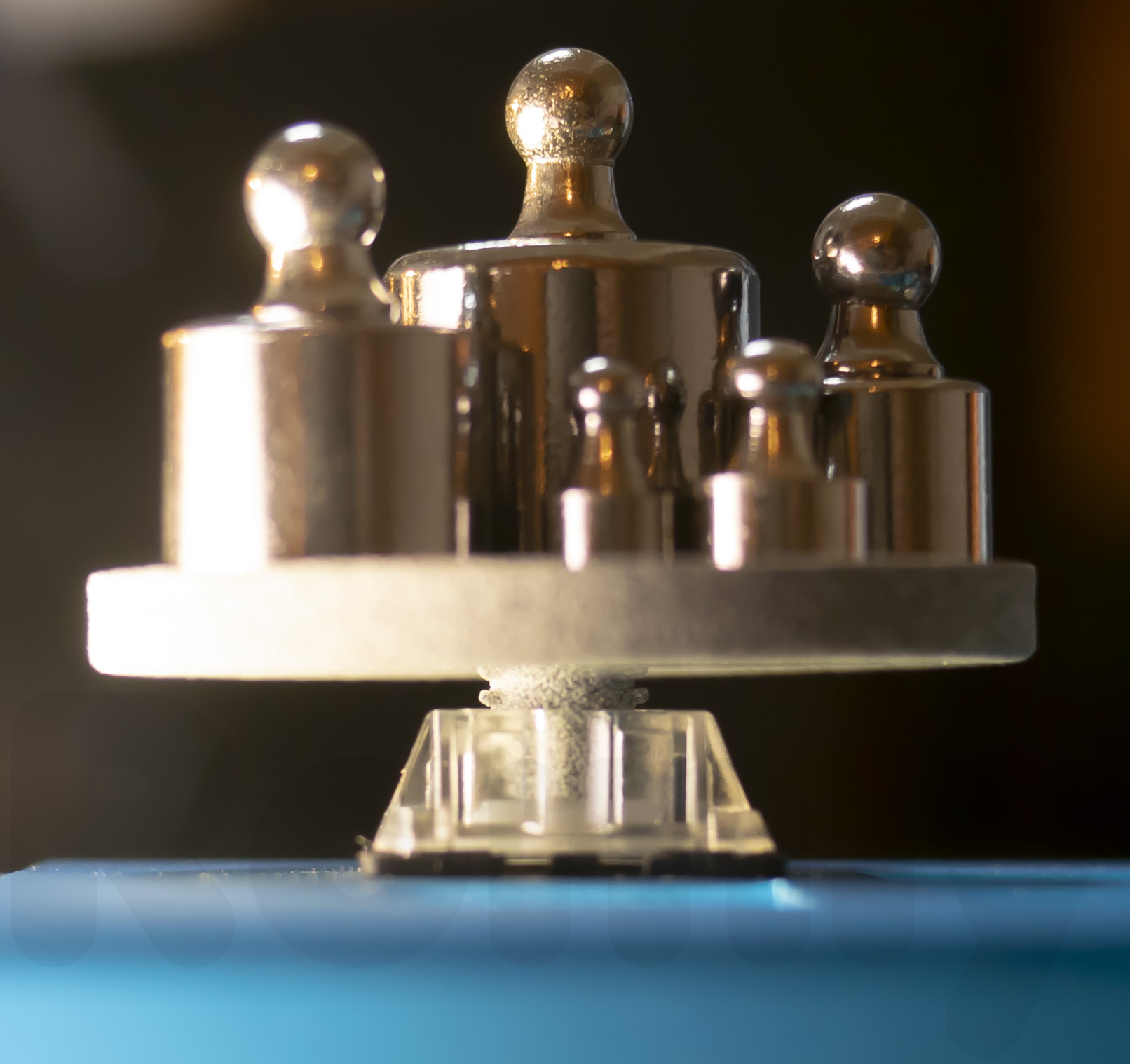 On the other hand, most delicate one, Clear. She down by a half weight of Green. She is delicate but also kind to others. 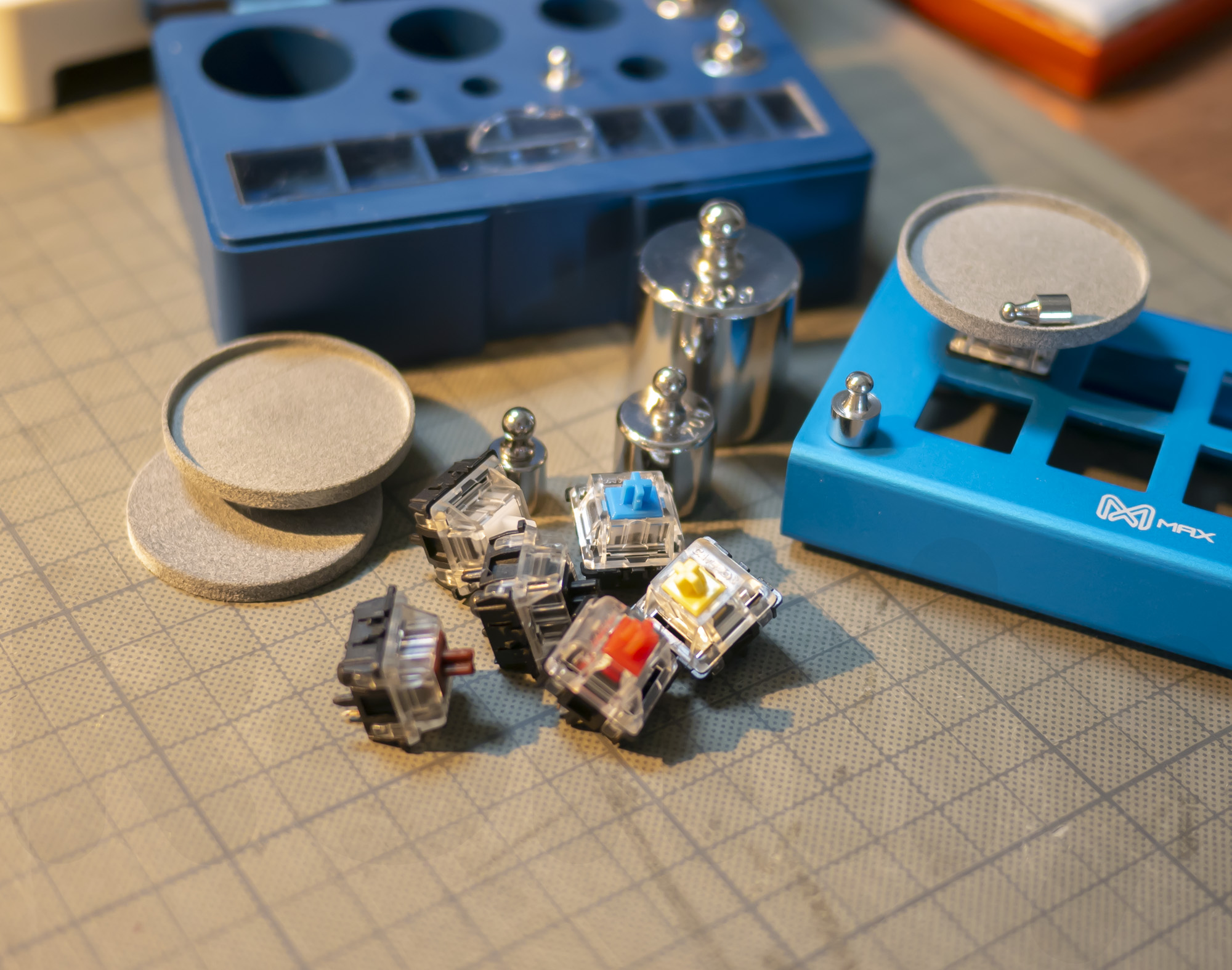 We can only know very rough values by this poor experiment. We can’t know the feels of switch as a force-stress curve graph, which is very common at mechanical keyboard community. But at least, you can know the switches weight as light or heavy. I know it can tell by simply pressing the switch!! If you don’t have anything to do at all, try it yourself. You’ll know the power of the Green.

FYI, I used these Gateron switch for Shigure-chan Mechanical Keychain, is appendices of “軸のブレない時雨ちゃん(Jiku no burenai Shigure-chan)“.You can buy it from BOOTH. Please check it out if you have any interest!! You don’t know which switch will come but enjoy like a loot box!🎊
The book contains a lot of illustration, mangas by @tama_mochi_ya, which means that very fun even if you don’t know keyboard at all!